The Satisfactory Alpha Test Weekend was a special release of Satisfactory that was made available for free to everyone who signed up for a closed alpha key, making the first publicly available build of the game. It was annouced by an e-mail, and the key alongside more info in a second e-mail. Both e-mails can be viewed below.

The weekend ran from the 8th of March to the 11th of March 2019 from/to 5pm GMT. After this date, Epic Games Launcher would update the game, making it impossible to launch. This could, however, be prevented by disabling automatic updates or copying the game files elsewhere.

The build of the game contained only Tiers 0 to 3 and excluded the Caterium research chain (at the time, the MAM wasn't divided into research trees, Sulfur and Quartz research chains weren't implemented). Multiplayer was supported between players also playing on the Alpha Weekend, but not with Closed Alpha builds. No official patch notes were released, but there are mentions of the Test Weekend in the patch notes of previous Closed Alpha builds.

The full version and build that appeared in-game was ++FactoryGame+rel-main-alpha-weekend-slim-CL-94852.[1][2] This reveals that it was released between Patch Closed Alpha 4.1 and Closed Alpha 5.

Alpha Keys for All Sign-ups

If you are getting this mail you will get a key for the Alpha Test Weekend.

It will start around 5pm GMT on Friday March 8.

It will end around 5pm GMT on Monday March 11.

Feel free to stream, record and do anything you can with the game.

The NDA will be completely lifted and gone, forever.

More information and your key will arrive when it starts.

Read more about the state of the game.

Read more about our plans ahead.

Take me to Discord

Thanks for being a huge part of developing Satisfactory!

Welcome to the Alpha Test Weekend

There is a lot of information! Please read the entire email.

When does the Alpha Test Weekend Finish?

NDA is completely removed. You can upload videos, stream - whatever! The NDA will not return after the Alpha Test Weekend.

Some of you may complete the available content! COOL! GO YOU! You may feel you've run out of things to do...

But there is more to do than just building a factory for Research Tiers:

Multiplayer is in! You can play with your friends. It is not as stable as we would have liked, but it's still pretty good.

We officially support 1-4 players, but we will not limit it! So if you want to try with more players go for it. The game will probably break but it will be funny.

Everybody's save files will be compatible with the Early Access launch version (March 19th).

Here is some information for our previous Alpha Testers (the ones who got keys before this weekend):

How to install the game

You need to install Epic Games Launcher to download the game.

Once you've installed the Epic Games Launcher and logged in, click on your user name in left bottom corner. A menu will appear where you can find the "Redeem Code" button. 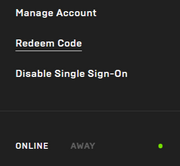 If the game doesn't appear in the library straight away, please try reload the page/restart the launcher.[sic]

Play the game and give us your honest feedback.

Bring up anything from minor bugs that annoy you to design-flaws regarding the game, we want to hear it all!

Weird crashes and game blockers should be extra highlighted!

We've set up a forum where you can up-vote items that you deem important or things you've encountered.

Please, I, Jace Varlet, I beg you. Please. DO NOT message me with feedback or bugs. There is nothing I can do for you, unfortunately. Please use https://questions.satisfactorygame.com/

Join our Discord to discuss the game

We'll keep you updated with known issues, potential work-arounds and any other immediate update through discord [sic].

Thanks for being a huge part of developing Satisfactory!