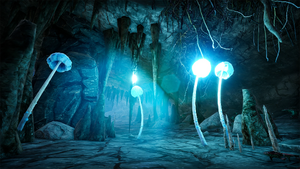 A cave environment with Glowing Round Blue Cap Mushrooms.

A cave is any area in the Satisfactory world that is located underground. Numerous caves are spread across the map, with varying widely in size and scope. Some caves may act as shortcuts between areas, stretching under mountains, whereas others may only have a single entrance and hide a secret or reward, sometimes even acting as an obstacle gauntlet for the player to surmount.

Cave entrances often blend in with the landscape and can be hard to spot. Sometimes, cave entrances can be obscured by waterfalls, hanging vines that must be removed by the player, or breakable rocks that must be blasted away with explosives.

Cave interiors usually consist mainly of bare rock with scattered pebbles. Depending on the biome, plant roots may protrude through the ceiling. Almost all caves are filled with stalactites and stalagmites, mainly as a decorative element. Mycelial growths (mushrooms) are also common, making caves a good location to scavenge their resources. Some caves feature a blue, bio-luminescent grass-like plant covering on their ground surface, and some larger caves include large, glowing blue mushrooms, which serve as a player light source.

Some caves function as secret item locations, often blocked by a gauntlet of obstacles for the player. These commonly include (detonable) large boulders, Stingers, or Poison Gas, but the player will frequently be rewarded with a Power Slug or an alien artifact (Somersloop/Mercer Sphere) for overcoming these.

There are 52 caves mapped in the Online Interactive Map.[1] Many more caves are in the game but yet to be mapped.

Different caves can stack on each other on different elevations.