Conveyor Belts in the world

Once a Conveyor Belt is connected to a building's output (such as a Miner), it will begin to pull items out from the building's output slot. Conversely, a belt connected to a building's input port will attempt to push items into its input slot, provided there's sufficient space. Items on the belt can be manually picked up E. Items cannot be manually dispensed onto a belt; it can be done by constructing a temporary Container.

If the belt doesn't lead anywhere, items will not fall off the belt, instead, they will simply stop on the belt. The same occurs if the connected building is either full or cannot accept the item on the belt.

Belts cannot transport items in stacks, each item (visually) on the belt represents one item. Lower mark Belts can also cause bottlenecks especially in the early game, where Miners are capable of producing more items per minute than the belt can transport.

Each mark has higher throughput (measured in items/min) than its predecessor, and also appears more visually advanced.

Besides serving their primary purpose as transporting items, Conveyor Belts also move pioneers. The transportation speed roughly matches how fast items are moving on the belt.

A single Conveyor Belt segment can be from ~0.5 up to 56 meters long (exactly seven Foundations), calculated using the euclidean distance formula

. The minimum turn radius is two meters. The building cost is roughly 0.5 materials per meter, rounded up to nearest integer.

The maximum slope is 35°, calculated using arctan(Z/sqrt(X^2+Y^2)) (in degrees, where X, Y, and Z are the belt's displacement on the axes). Conveyor Belts cannot incline along the Z-axis while turning in the XY plane. They will do one, then the other. The greatest possible rise in the shortest distance is 31 meters vertically and 45 meters horizontally.

When building between poles, the first snapping point will always be the input and the second the output, unless if the first point is connecting to an input of another building or conveyor belt. Once constructed, the belt cannot be reversed, but can be directly up/downgraded into other conveyor marks by aiming at them with the other mark.

Belts can be built on top of some buildings, such as Constructors, provided there is a valid spot for a conveyor pole to be automatically placed on. They can also intersect each other, some non-colliding entities, and terrain freely.

This means the belt is being constructed through other buildings. Conveyors have to be always constructed second, after the buildings they are being connected to are already built, with two exceptions:

The floor is too steep[edit | edit source]

This means the floor below where the Conveyor Pole would be built is too uneven. Using a flat surface, such as a Foundation, could help.

The conveyor belt is too short/long/steep[edit | edit source]

Refer to § Construction above. 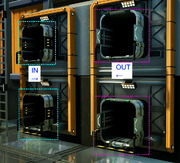