Multiple cargo freight cars and locomotives can be chained together to form a single train. The train is currently the fastest vehicle in-game, allowing for efficient long-range resource transportation.

The Electric Locomotive requires a minimum of 25 MW to operate at all times, even when stationary or docked at a Train Station. It may draw up to 110 MW when accelerating, with the exact amount depending on how much "strain" the engine is under; for example, it will use more power when climbing a hill than on a level track. Likewise, it will automatically dial back the power consumption when under less strain, dropping to its minimum 25 MW when going downhill. A locomotive cannot accelerate unless the railway is powered, but it can always use its brakes.

Note that the power consumption shown in the HUD is multiplied per engine on that train. For example, when driving a train with four engines and drawing the maximum load of 110 MW, you are actually consuming 440 MW total.

A locomotive can only be constructed on a railway. The face with the windshield is the front and the side with six motors in the rear. When driving a train manually, you can travel at full speed both forward and backward regardless of the position or direction of the locomotive within the train. However, auto-pilot can only travel in a given direction if there is at least one engine at the front of the train. For example, a train with three engines facing forward can only drive forward with auto-pilot and requires a loop at the end of the line to turn around; a train with the first and last engine facing forward and the middle engine facing backward can still only travel forward; a train with the front two engines facing forward and the last engine facing backward can be automated in both directions and no longer needs to turn around. Every engine always provides full torque regardless of the direction of travel.

Locomotives automatically engage the brakes when there is no driver. Thus they can be freely built on a slope and will eventually come to a stop if you jump out of a moving train with no auto-pilot. To add more locomotives or freight cars to the train, simply aim at the railway in front of or behind the train and the blueprint will usually snap in place. Sometimes the blueprint will not look like it is snapping, but building the engine or car anyways will still connect it to the rest of the train if it is close enough that it should snap. There is no way to edit the middle of a train; the only way to edit the middle of a train is to dismantle the whole thing and rebuild it in the new layout. Engines or cars can be added even when the train is moving, but only by the host in multiplayer games.

A locomotive cannot be dismantled while it is moving or on an automatic schedule, only when it is completely stationary and auto-pilot is disabled. However, the railway beneath it can be dismantled and the train will abruptly halt and remain floating in the air.

Entering a train with auto-pilot disabled will allow you to drive it manually. Holding the forward or backward directional key will begin "revving up" the engines, slowly increasing the power consumption until the motors generate enough torque to overcome its weight and the train begins to accelerate in that direction.

Either brake systems can be engaged separately or both can be engaged together for maximum stopping power. When stopped on an incline, even a very gentle one, releasing both brakes will cause the train to begin rolling downhill. If it is for some reason necessary to remain stopped on an incline and manually holding the brakes is to be avoided, exiting the train will automatically engage the brakes and they will remain "locked" down even after re-entering the train until some input is received or auto-pilot is engaged. 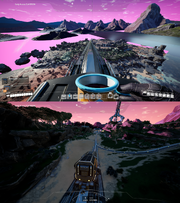 Under its own power, a locomotive's top speed is approximately 120 km/h on a flat railway. Its top speed is slower when climbing a steep incline, but should always be capable of reaching at least 54 km/h so long as the train is not too heavy for the engines. When rolling downhill it can rapidly accelerate well beyond its top speed, nearly 500 km/h given a long enough hill (see image).

Currently, trains can only collide with wheeled vehicles and will pass freely through everything else, including natural terrain, player-built structures, other trains, and even the player themselves, doing no damage and losing no momentum. The sides of the train do have collision boxes, but only to prevent the pioneer from clipping through the sides.

If used on a very flat railway, a single locomotive can pull dozens of freight cars, possibly with no limit if the railway is perfectly flat, only with progressively slower acceleration.

However, even a slight incline will cause the weight of the cars to quickly overcome the engine and it will begin to roll backward. Using natural hills or building a mixture of 2m and 4m ramps it is possible to achieve the steepest possible incline (see

Railway for more details), but a chain of 2-meter ramps or Double Ramps is the steepest incline that can support a railway and can be quickly and easily built. Using such an incline as a testing area, a single locomotive is just barely capable of pulling five freight cars without losing speed and can even start from a full stop on such an incline, but it is very slow and is unlikely to work in any rail system with hills, and six cars cause the train to slowly lose speed and eventually start rolling backward given a long enough climb. Therefore it is recommended to maintain a ratio of no more than four cars per locomotive, but the flatter the railway, the fewer locomotives are required.

A Freight car's weight remains the same regardless if it is loaded with items or not, so it will not affect the Locomotive-to-Freight Car ratio.

The maximum throughput of a single train can be calculated in stacks/min or fluid m3/min using the following values:

Then, the equation is:

E.g. for a train of three carriages that completes the round trip in fives minutes:

stacks per minute or

Industrial Fluid Buffers for each Platform to prevent the flow from stopping.

The following table shows how long it takes to completely fill up or empty the storage of a single Freight Platform. Format is h:mm:ss.

Two end-to-end stations with a fixed length of railway in between are built, and the time taken for a round trip is measured: The train is configured as a 1-n-1 double-headed train, where n is the number of freight cars attached in-between.

A double-headed train with no Freight Car and manual drive is measured as a reference. Where a Freight Car is present, the loading and unloading time of 25 seconds at each station is included.

Pressing the vehicle menu key while inside the train (same as Resource Scanner, V) or interacting with any connected train station will bring up the train schedule menu. This allows you to toggle auto-pilot on or off and to edit the automation route. Name the train, then select it and set at least two different stations and a schedule will be created, which can be edited later. Train stations will only accept trains from one direction, but a train can depart in either direction. If a train does not begin moving once a route is set, check that the railway is connected properly, that all train stations are facing the correct direction, and check that the line has power.

Automated trains accelerate and brake slower, brake around sharp turns, and attempt to slow down as they approach a station on their schedule. However, if a train is unable to stop itself before reaching its scheduled stop (such as a station at the bottom of a steep hill), it will instantly halt exactly as if it had reached the end of a railway.

All connected locomotives are treated as a single train and share the same train schedule. Modifying a train's length in any way will completely reset its name and existing schedule.