FICS⁕MAS was a seasonal holiday-themed in-game event, which lasted from Dec 1st, 2020 to Jan 18th, 2021. Exclusive items and buildings were available during this event, which remained once the event ended.

The event was set to be enabled by default the first time the game was updated to Patch 0.3.7, both in the early access and experimental branches. It could be disabled entirely in the main menu (not the in-game pause menu) by ticking the Disable Seasonal Events option in gameplay settings.

After the event ended (18th January 2021[1]), FICSMAS items and buildings remained in the world, but Gift Trees stopped producing gifts. Production buildings kept their recipes, but you can no longer select the recipes elsewhere. The build menu category, HUB Calendar, and MAM research chain disappeared (this means no more FICSMAS buildings can be built).

While the event was active, a Satisfactory themed advent calendar could be found to the right of the HUB Terminal. This calendar would give access to a new gift each day of the event up until December 25. Interacting E with the Calendar would bring up a poster featuring a mini puzzle game. The pioneer would have to look for a hidden number corresponding to either the current date in December or a previous date. There were 25 total gifts to be earned. By clicking the number equalling to the current day of December, items would pop up as a daily reward. Those items could then be collected into the inventory.

If the player couldn't find a specific number, they could use a hint system that highlighted the desired number.

The rewards for all of the days were randomized, except for the 1st, 4th, 5th, 11th, and the 25th of December.

For all other days, the sequence was shuffled, although it was guaranteed to get all the items below:

Rewards from missed previous days could be collected, while those from upcoming days couldn't. When a reward was collected, its number changes from pale white to gold color.

The calendar included a tip function at the bottom right which highlighted the number that was entered into its search bar.

While the event was active, Giant FICSMAS Gifts would be dispensed from the sky at random intervals, but only within 300 meters of the player. They fell slowly with parachutes and would land on the first solid object in contact, shaking the screen and with a pop effect. They could be interacted with to collect FICSMAS Gifts. If they are hard to access such as on top of a tree or a cliff, using Ladders was one of the easiest methods.

Each of them was sized between 4 × 4 × 3 m to 12 × 12 × 7 m. The size of the box corresponded to the amount of FICSMAS gifts inside. They had a collision box that did not affect vehicles but could affect factory construction to a certain degree, so it was advised to pick them up. Each of them yielded between five to 40 FICSMAS Gifts when picked up.

They had a number limit, and picking them up would enable more gift boxes to be dispensed. When picking up a gift, there was a small chance that ADA would say one of the following lines:

A new research tree called 'FICSMAS Holiday Event' was available exclusively during the event, which could be unlocked in MAM: 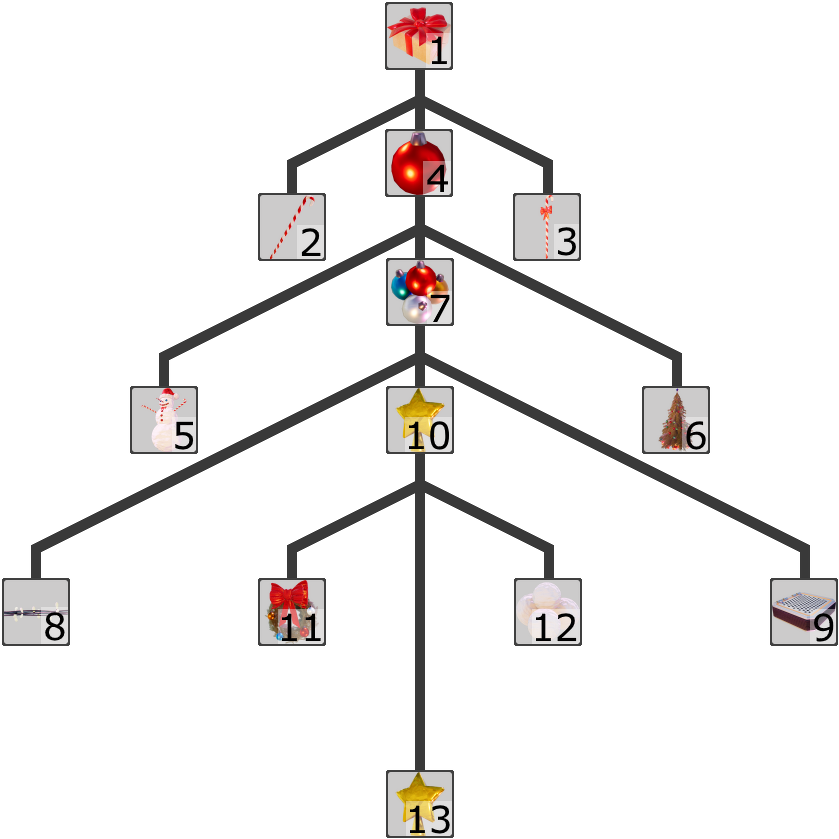 The entire research tree required only Tier 3 tech - only Constructors, Assemblers, Smelters and Foundries were required to automate all the FICSMAS parts (they cannot be crafted at Craft Bench). The number of contents available was locked behind certain key items, which could only be obtainable by scheduled daily rewards. For example, the first key item, a Red FICSMAS Ornament, was required for further researches down the tree.

Special FICSMAS buildings and parts can be obtained and produced from this FICSIT Holiday present.

A delicious Candy Cane to be enjoyed during the FICSMAS Holidays. *Disclaimer: Can't be consumed....

It's snow. Not the nice, thick, crunchy kind though... more the disgustingly wet, slushy kind... Guess we can make stuff from it.

All the FICSMAS Ornaments smashed together to make even more Ficsmas Decorations!

A fancy Bow, maybe someone can wear this? You certainly can't! Can probably also make some parts and decorations from this.

A special Tree Branch, used to produce parts and buildings during the FICSMAS Event.

This special FICSMAS Star signifies the productivity of FICSIT all across the universe. It also signifies the fact that you have nearly completed the Holiday Events, so time to get back to work.

A decoration used to make decorations. Its use cases are questionable.

All items were unlocked via the FICSMAS Research chain in the

The FICSMAS Gift Tree, once unlocked, could be used to automate FICSMAS Gift production. Conveyor Belts were required to bring out the produced gifts, as the tree itself could not be interacted with.

No FICSMAS items could be crafted by hand, all had to be automated in a machine.

Items were used in the FICSMAS Research chain in the MAM for additional unlocks.

Before this patch, items would block the input of the AWESOME Sink.

All items were unlocked via the FICSMAS Research chain in the

Unlike other items, FICSMAS equipment could be only crafted by hand, in the

The Candy Cane Basher was the FICSMAS variant of the

Xeno-Basher, they are functionally identical other than appearances. The Snowball Pile was the FICSMAS variant of the

FICSMAS equipment could be sunk, each item yielding one point.

This special delivery gigantic FICSMAS Tree is decorated by progressing the FICSMAS Holiday Event MAM Tree. Better pick a nice spot for it, because every employee only gets one!

Makes it snow! Can be attached to walls and ceilings.

A giant, delicious Candy Cane.
*Warning: Is not actually delicious... or edible, for that matter.

Do you wanna build it?
You will finally have a friend!
*Disclaimer: Is not actually your friend.

Can be attached to walls. Is pretty.

The Giant FICSMAS Tree came with no decoration by default, where each upgrade research added decorations onto it. The first upgrade added Candy Canes. The second upgrade added Red, Blue, and Copper ornaments, along with the FICSMAS power light. The third upgrade added Iron ornaments and colorful gift boxes to the tree. The final upgrade added a decorative star at the tip of the tree.

Despite its description, multiple Giant FICSMAS Trees could be built.