The Giant Flying Manta is a type of large flying creature that patrols around the world.

Manta can be found at: 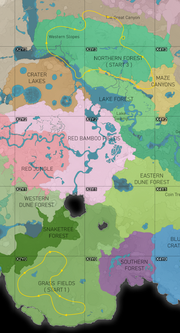 The paths of two Mantas in the map. Both circuits take exactly five minutes.

This article may need cleanup to meet quality standards.
Please help improve this if you can. The Discussion page may contain suggestions.

Giant Flying Mantas glide through the sky and are accompanied by swarms of small flying creatures. Each manta patrols on a fixed path. The round-trip time for each manta is exactly five minutes. The manta and its flock are immune to the pioneer's attacks. Pioneers can jump onto its back and take a ride. Doing so generally requires a

Jetpack or tall Ladder. Take caution as the pioneer can only stay on the center part of its body, standing too near to the edge of the wing can cause pioneers to fall and suffer massive fall damage.

If man-made buildings are built in its path, it will simply fly through them as there is no collision between the Manta and the buildings. The pioneer, however, if standing on it, does collide with the buildings and will be pushed away from Manta.

Its body emits blue lights during the night.

Be sure to stand near the center of its back to avoid falls. The Manta around the Northern Forest tilts more, so its safe spot is narrower. Reloading the game while riding will reset the Manta's position to its spawn point, causing the pioneer to fall.