Used to blow up cracked boulders, rocks and invasive vegetation.
A remote-control device used to handle and detonate Nobelisks.

Instead of a regular explosion, this Nobelisk creates a deadly gas cloud.

Instead of a regular explosion, this Nobelisk generates a powerful shockwave.

A Nobelisk that detonates into multiple smaller explosions. Practical when clearing out large areas of vegetation and other inconveniences.

This Nobelisk uses a nuclear fission reaction to generate a massive explosion.
WARNING: Ensure all FICSIT property is clear of the blast zone before detonation.

The Nobelisk Detonator is a piece of handheld equipment used to detonate Nobelisks. They create explosions, which can be used to remove cracked boulders, Flora and Fauna.

Nobelisk Detonator is unlocked via the Sulfur Research chain in the

MAM using:
Nobelisk is unlocked via the Sulfur Research chain in the 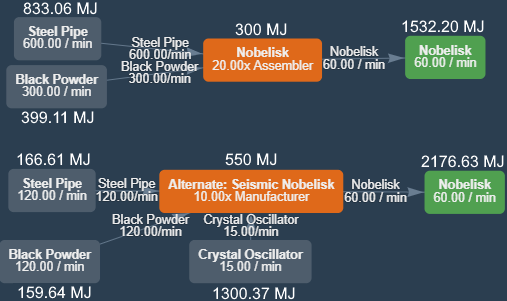 As with other equipment, Nobelisk Detonators have to be equipped to be used. Nobelisks serve as 'ammo' for the Detonator and have to be reloaded with R for arming.

Nobelisks can be thrown with

, holding down allows throwing farther. Running forward while throwing will increase the throw range. Multiple Nobelisks can be deployed before exploding them, by reloading instead of detonating. Nobelisks will stick to any surface it touches when thrown, including creatures and other Nobelisks. A thrown Nobelisk cannot be retrieved in any way.

After at least one Nobelisks has been thrown,

is used to detonate. They will be detonated to create chains of explosions. Alternatively, striking the Nobelisk with any weapon (or having it hit by a Spitter spit) will detonate it, but no other Nobelisks.

In place of Nobelisks, the use of FICSMAS Snowball can also be used. Equip the Nobelisk Detonator and press G key to Switch Ammo types. The FICSMAS Snowball operates the same as a Nobelisk and has to be reloaded with R for arming.

When detonated, each Nobelisk blows up in a 7.5 meters radius, dealing up to 50 damage at the center. Damage quickly falls off farther from the center of the explosion, making it almost impossible to deal full 50 points of damage due to the collision box between it and the target. Therefore, at least 3 Nobelisk explosions are required to kill a fully-healed pioneer.

Nobelisk can't deal damage to targets that don't have HP, such as buildings, Poison Pillars, and vehicles.

The damage of a Nobelisk can be blocked by any physical cover such as Walls, Conveyor Lift and Tree. The knock-back effect, however, can still pass through.

Nobelisk Detonator can be sunk into the

Nobelisk can be sunk into the

Gas Nobelisk can be sunk into the

Pulse Nobelisk can be sunk into the

Cluster Nobelisk can be sunk into the

Nuke Nobelisk can be sunk into the