This page is being preserved for archival purposes. As a matter of policy no new unreleased content should be added here, but additional information regarding the existing content is still considered relevant.

Quantum Crystals are crystals manipulated to store data in quantum bits. Can store an incredible amount of data.

50
The Quantum Crystal was a crafting component used to create

50
The SAM Fluctuator was a crafting component used to build the Remote Storage and the Converter.

50
SAM Ingot was a crafting component made from SAM Ore that is only used to craft SAM Fluctuators.

Body equipment
The Heat Resistant Suit would have been used to prevent the engineer from taking any heat damage. It is unknown where it would get used, as currently there is no heat damage (unlike Radiation and its suit for example). It didn't change the engineer's appearance.

N/A
The Rebar Scatter Gun was a ranged weapon that could be unlocked in Patch 0.1.5. It couldn't be reloaded with

Its functionality has been reintroduced in Patch 0.6.0.0 with the

Shatter Rebar alternative ammo for the

150 m
The Rifle Mk.2 was an upgraded version of the

Smelter had a Mk.2 variant that would operate either 25% or 50% faster (listed in the infoboxes below).

Crafts one part into another part. 50% faster than a normal Constructor.
Can be automated by feeding parts into it with a conveyor belt connected to the input. The produced parts can be automatically extracted by connecting a conveyor belt to the output.

The Manufacturer Mk.2 is 25% faster than a regular Manufacturer. Requires 60MW of power to operate.

Converts any two raw resources into one raw resource of your choosing. Requires 40MW of power to operate. Is built using the super rare resource Strange Alien Metal.

Cable
The Converter was a building and could be used to convert any two raw resources into any one raw resource of the player's choice. It required 40MW of power to operate and used a temporary model.

Motor
The Hadron Collider was a building used to produce Dark Matter. It has unusually high power usage. 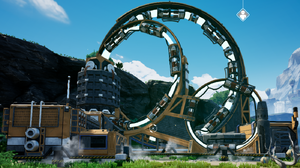 Light up the night, just make sure to provide it with power.

Wire
Industrial Lighting was a Power Pole-like with two power connections. Despite its name and appearance, it did not emit any light, even while powered, rendering it useless. It consumed 1 MW to "operate". As of Patch 0.4.0.0 it has been renamed to Street Light.

When connected to a Power Grid it makes the Floor it stands on and any Floors connected to it propagate power. No More Power Poles or Power Lines on floors!

High-Speed Connector
The Powered Wall was a building that powered the Foundations underneath it, removing the need for Power Lines.

The Quantum Encoder takes two parts and makes them into one Quantum Part. Requires 40MW of power to operate.

High-Speed Connector
The Quantum Encoder was a building used for crafting the Quantum Crystal and Superposition Oscillator. 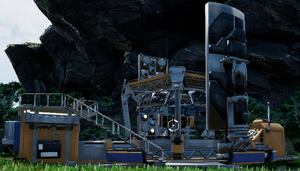 Strange Alien Tech that allows you to use resources within this storage from anywhere.

Cable
The Remote Storage was a building that could be used to access items stored within the storage unit from anywhere, accessible from the inventory. It only had one input and no outputs. 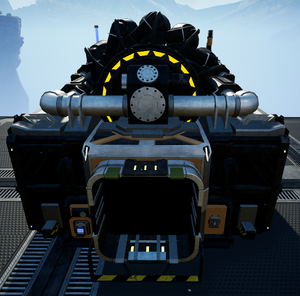 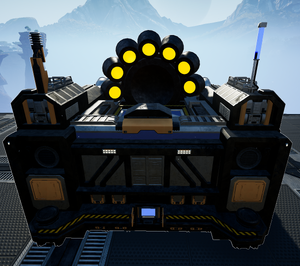