Most buildings require electricity, or power, to function. Power is produced in power generators (see below) and consumed by buildings. Power is transferred via Power Lines, Power Poles, or Train Stations and Railways. Power is measured in megawatts (MW).

In the game, the term Power works similarly to electrical Current: A power generator produces some amount of current, and each of the power consumers, such as Constructors, will take up some current. When the current demand is within the generation capacity, it is safe. When demand is more than generation, the entire circuitry trips.

There is no concept of Voltage and Resistance in game.

A power grid is a network consisting of power-generating and power-consuming buildings connected through Power Lines, Power Poles, Train Stations, and Railways. A graph of total power capacity, power production, and power consumption can be viewed by interacting E with any Power Pole, generator, or Train Station on that grid.

Power Grids can be split using a Power Switch. Excess energy can be stored in Power Storages, to be used in cases of consumption exceeding production.

If power consumption ever exceeds production and there is no energy in Power Storages to use, the power grid will trip. All connected power generators and power consumers in that grid will stop working. The sound effect of the trip can be heard from any part of the map, regardless of the distance between the tripped devices and the engineer.

The engineer can reset the circuit breaker by interacting E at any of the connected power generators or Power Poles. In the UI, pull down the lever (refer to the image below) to restore the power. Before resetting, it is advised to either attach more power generators to the grid or temporarily remove power cables to some of the areas of the factory, otherwise, the power grid will simply overload again as soon as it is reactivated. Disconnecting enough power consumers will automatically reset the circuit breaker.

A power trip may also allow hostile creatures to respawn. 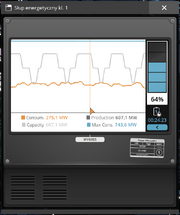 Power generators convert fuels into power. Each type of generator building has its own set of fuel item types and power output.

There are five total types of power generators:

The table below shows the raw resource consumption rate (per min) for every 1 GW of net power generated, among different generation methods:

Overclocking is unlocked at the MAM. The clock speed of buildings can be adjusted by interacting E with it and adjusting the slider.

Power Shards are required to increase the clock speed beyond 100%, up to 250% maximum.

Underclocking can be done freely once overclocking has been researched and costs no Power Shards.

Energy is a derived unit of Power. When Power is being consumed (or produced) over some time, the product of Power and Time is called Energy. Where power fluctuates over time, the average power can be used instead.

The unit of energy depends on the unit of Power and time measured. For example,

Energy can be used to compare the burning time of Fuels in vehicles or in generators, or comparing the energy efficiency between different Alternate recipes of an item.