From Satisfactory Wiki
Jump to: navigation, search
This article may need cleanup to meet quality standards.
Please help improve this if you can. The Discussion page may contain suggestions.
Reason: "Page needs to be partially rewritten as it has weird formatting with headings only having one sentence under it"

An electric locomotive and two freight cars on a railway, with a second railway behind it.

Railway is the buildable structure which trains run on. Railways connect Train stations and form a logistic network besides belts and optional automated wheeled vehicles. As Railways have superior throughput advantage and use relatively low CPU over multiple parallel Conveyor Belts, they are almost essential for the construction of a megabase.

As there is currently no hitbox for the trains, and trains can clip through each other without collision, this means a busy railway can have infinite item throughput.

Although the train can move this amount of items between stations, the limited ports at the station mean a much less transfer rate can be realized in end-to-end transfer using the train.

The sharpest possible 180-degree turn. Note that buildings can still snap at the extreme edges of the turn.

The minimum turning radius for a perfect 90-degree turn on a foundation is 17 meters as measured by the center of the railway at the end of the turn (where the cursor will aim when building). This means a 180-degree turn can be completed within an area of exactly five by two and a half foundation blocks and still allow snapping to the edges of that area (see image).

The maximum slope is more complicated, as it depends partially on the angle of the start and endpoints of the segment, due to the way curves will be "smoothed" from one section to the next. If the start and endpoints both lie on a flat surface such as a foundation, the maximum slope is 28 meters high over a distance of 94.5 meters, which is a ratio of 1:3.375. However, if the start and end points both lie on a ramp 8m x 2m, the slope can be increased to a ratio of 1:2.7. You cannot build a rail on a ramp 8m x 4m, but you can use a combination of 2m ramps and 4m ramps to achieve a steeper grade than a chain of 2m ramps.

A fully functional railway hidden beneath some foundation.

The collision box of a railway segment is six meters wide and one meter tall. Because of its short collision box and the fact that Locomotives have no collision, it is possible to "hide" a fully functional railway beneath a floor of foundation with a 1-meter space beneath them, then more foundation to lay the railway on (see image). 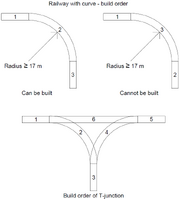 The advised build order of a railway curve.

The building of a railway curve is currently glitchy. If the building is started from an existing railway and a curved Railway with a free end is being built, it is usually easier to build. However, if an attempt to connect two existing railways with a curve is made, it will show a 'Turning Radius too tight' warning, despite the radius being larger than 17 meters. Therefore if a curved railway cannot be built, try to rebuild it with a different build order.

It is advisable to build the Train Station before building the rail. Attempting to build the station on top of the existing railway will cause the station will be built on top of the rail but not connected to it. You could, however, build the railway with the free end snapped to the foundation then build a train station at the end of it. The same is applied to Freight Platforms.

It is advised to put an end-of-line loop for single direction train. Building the loop itself takes trial and error, and separate the loop into several shorter curves are advised: the shorter the curve, the lesser chance that 'Too tight turn!' warning will appear.

There is no collision box implemented at the moment, which means that the rail (and entire trains) can clip through the ground. Judging from the visual it is about six meters wide and one meter high.

There are no supporting columns for the rail, as opposed to what is displayed in the E3 trailer. The latitude curvature of a rail is only dependent on the slope of the starting and ending points, which means if the starting and ending points lie on a flat surface such as foundations, the rail will be perfectly horizontal, despite a large gap in between. On the other hand, attempting to build on uneven ground could lead to unexpected sloping of rail.

When building a railway, the angle of the segment you are building is affected by the curvature of the segment you snap to, which in turn affects the next piece you build. Because of this, it is possible to build every segment snapped to a straight line on your foundation, yet the entire track will curve endlessly back and forth. This most commonly happens when building a railway from a segment placed directly on the ground and then connecting it to the foundation.

Switches are made by joining two rail segments and then adding a third segment to that junction. A flag will be placed on the switch, but currently, it's wonky, and its setting is ignored by automated trains.[1] A railway split cannot be created directly before or after a Train station or freight platform, so a short piece of railway is required in between.

Currently only Y-junction or 1:n junction work. X-junction, or n:m junction won't work, so consider merge them all followed by splitting if a multi-to-multi split way is required.

Railways conduct Power to ridden Electric Locomotives and connected Train stations, which can be used as the backbone of a Power Grid. A simple crossroad will not conduct power to the crossing railway; both railways must be connected with a split way or intersection to do so.