From Satisfactory Wiki
Jump to: navigation, search
This article may need cleanup to meet quality standards.
Please help improve this if you can. The Discussion page may contain suggestions. 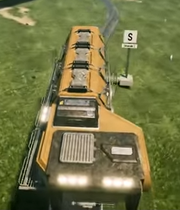 A train stopping at a train stop in the vehicle dev blog.

A Train Station is a building on the Railway where trains can be instructed to stop. Each station can be renamed in its UI.

Train Stations must be constructed before tracks, as it comes with its own station track. It provides a snapping point for Freight Platforms and is necessary for them to function.

Train Stations are directional, which is indicated by arrows on the platform and the construction hologram. Additionally, the round side of the roof and the side where the name display is is where the front of an automatically docked locomotive will be. Trains on autopilot will only stop at the station in the specified direction, passing through when going opposite.

The attached Freight Platforms can be rotated either way.

A Train Station always consumes 50 MW regardless if a Train is docking or not.

In the train station UI, a total of five hints can appear below the station name. The hint is chosen randomly when the UI is opened. These are: